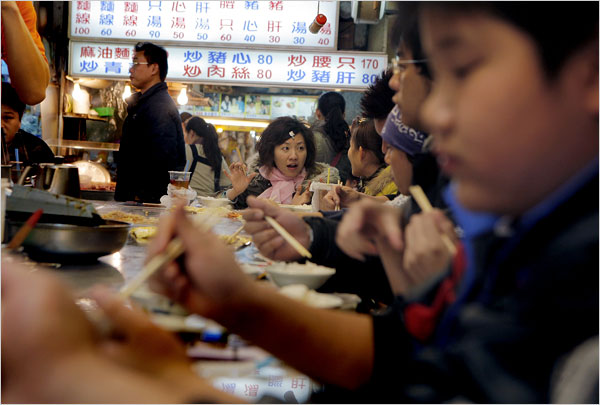 TAIPEI, the vibrant capital of Taiwan, distills the best of what
Asian cities have to offer — great street food, crackling night
life, arguably the world’s best collection of Chinese art, and
hot springs and hiking trails reachable by public transport. With
interest in mainland China surging, Taipei — one of the most
underrated tourist destinations in Asia — offers a look at a
different side of China, one that escaped the deprivations of
early Communist rule and the Cultural Revolution. Here is a
Chinese culture (some contend that it is uniquely Taiwanese) that
practices bare-knuckled democracy and has preserved traditions
thousands of years old in a way that was impossible to do on the
mainland. 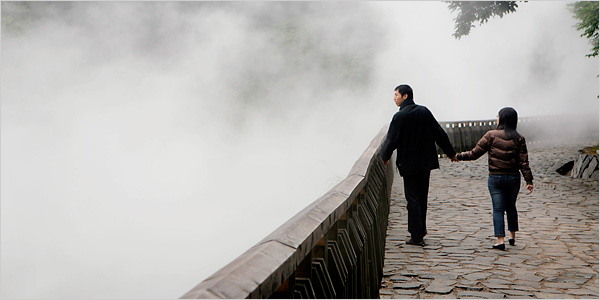 Slide Show
A Weekend in Taipei

The National Palace Museum (221 Chih-shan Road, Section 2;
886-2-2881-2021; www.npm.gov.tw/en/home.htm) is considered by many
to be the finest repository of Chinese art in the world; it houses
artifacts dating back to the earliest days of Chinese
civilization. The collection includes oracle bones, which have the
first known written Chinese ideograms, as well as ritual bronze
vessels, Ming Dynasty pottery and jade sculptured into the shapes
of cabbage and fatty pork. 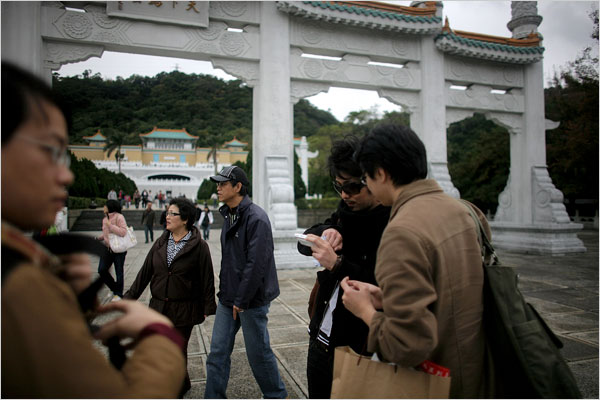 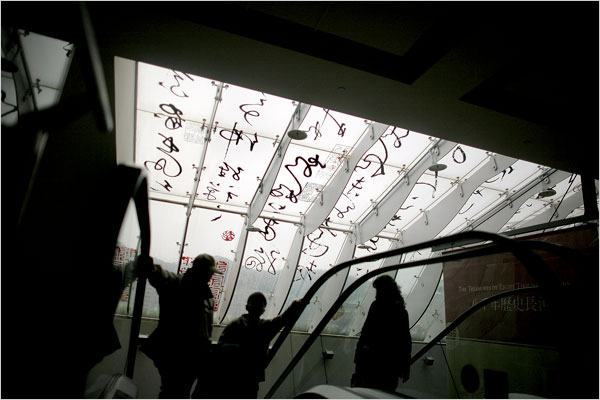 But enough of ancient culture, at least for now. Immerse yourself
in modern Taipei by going deep into the belly of the tallest
building in the world, the 1,670-foot Taipei 101 (7 Xinyi Road,
Section 5; www.taipei-101.com.tw/index_en.htm). The first five
floors, with stores like Armani, Louis Vuitton and Sogo, should
satisfy any shopping urge. Take a high-speed elevator to the
indoor and outdoor observation decks, starting on the 89th floor,
for unparalleled views of Taipei and its environs. In every
direction lie city blocks and avenues winding among
concrete-and-glass towers, with verdant hills rising in the
distance. Wisps of cloud float past the windows. Beware of
vertigo. 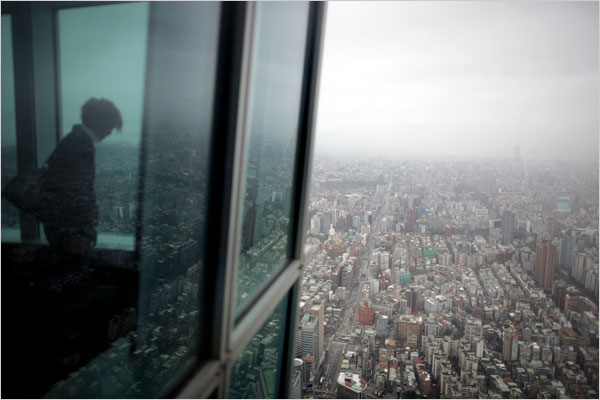 Dinner is only a few floors away. Go down to the 85th floor of
Taipei 101 to feast on traditional Taiwanese dishes at Shin Yeh
(886-2-8101-0185). Try the deep-fried oysters and rolls stuffed
with taro and shrimp. Set dinners start at about 1,600 Taiwan
dollars per person ($50.40 at 31.75 Taiwan dollars to the U.S.
dollar). Be sure to make reservations well in advance, ideally
several weeks before arriving.

Lounge bars have popped up all over Taipei. If you’re in a mood
for dessert with your drink, try the bar in the consciously hip
People Restaurant (191 Anhe Road, Section 2; 886-2-2735-2288). The
attitude starts even before you enter: the double doors have no
handles, nor do they open automatically. Figuring out how to get
in is only part of the fun. Once inside, walk through the shadowy
industrial rooms and take a seat at the bar or in the lounge,
where cocktails are served in large glass globes. Next, saunter
down the road to Rewine (137 Anhe Road, Section 1;
886-2-2325-6658), whose head bartender has won international
awards for his unique cocktails.

If you’re heading back to your hotel at dawn, or need some fresh
air early in the morning, stop in at the largest public park in
the city, Da An Park. It cannot compare to New York’s Central
Park in size — the width and length each stretch only a few city
blocks — but the smattering of tropical foliage, along with paths
meandering across a level green field, endow the park with a
serene air. You can watch Taipei’s dedicated tai chi
practitioners going through their moves or perhaps an elderly
woman doing a sword dance.

After a quick breakfast at one of Taipei’s many corner bakeries,
hop on the subway, called the MRT, to the New Beitou stop, about
40 minutes from downtown. The northern town of Beitou is renowned
for its hot springs resorts, some modeled after those in Japan.
Walk up the hill to take a soak at one of the newest of the spas,
Villa 32 (32 Zhongshan Road; 886-2-6611-8888; www.villa32.com). It
has all the atmosphere of a luxury spa in a uniquely Taiwanese
setting, with outdoor pools of different temperatures shielded by
wooden awnings and the shade of leafy trees. Rent a room for
several hours or spend the morning with other bathers in the
outdoor pools, separated by gender.

Taiwanese are discerning tea-drinkers, and going to teahouses is
popular here. One local favorite is De Ye Cha Chi, near the
Shandao Temple MRT station (3-1 Zhen Jiang Street;
886-2-2351-1002). Jars of tea leaves sit against a wall in the
quiet dining room, and guests can brew their tea in traditional
pots. Try Oriental Beauty, an oolong tea with a naturally sweet
taste that was supposedly given its English-language name by the
Queen of England after she had a sip. Prices vary, but a pot can
cost less than 300 Taiwan dollars.

To get answers to weighty life questions, or just to observe
traditional Taiwanese religious practices, head to Longshan
Temple, on Guangzhou Street in the venerable Wanhua neighborhood
of western Taipei. Built in 1738, its main altar houses a statue
of Guanyin, the goddess of compassion, but many other gods — some
red-faced, others long-bearded — also have their own shrines and
worshipers. In the courtyard, Taiwanese burn incense and cast red,
crescent-shaped pieces of wood to divine their fortunes.

If your energy is flagging about now, sit down for coffee at the
Spot, the favorite art-house cinema of many a Taipei resident (18
Zhongshan North Road, Section 2; 886-2-2511-7786). The white villa
that houses the screening rooms, restaurant and bar was once the
official residence of the American ambassador. It is one of the
most atmospheric buildings in Taipei, redolent of colonial life in
the tropics, with lush grounds that shield the villa from the street. 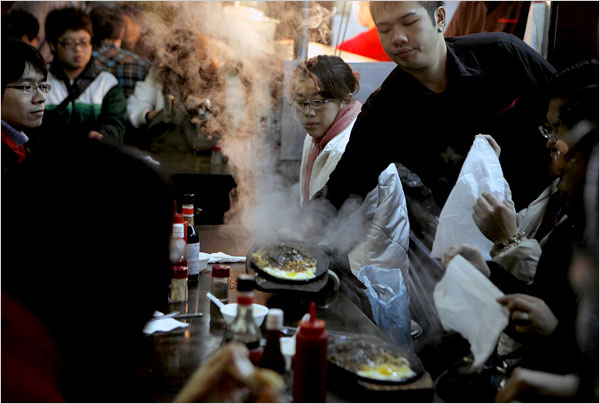 Hey, this is your travel host, Naomi. I would like to show you the top 5 attractions of Taipei, Taiwan.

#5: National Concert Hall, among the world's most beautiful concert halls. Local as well as international music groups perform here. It's an important part of Taipei's fabric.

#4: Rainbow Bridge. This striking bridge is a colorful addition to the landscape of Taipei.

#2: National Palace Museum. Set inside a remarkable complex, this museum is famous around the world and contains artifacts from thousands of years of Chinese history.

#1: Taipei 101, among the most popular attractions of Taipei. This is one of the world's tallest buildings. Inside the tower you'll find observation decks as well as restaurants.

Thank you for watching our travel video series. See you next time.
類別：
旅行與活動 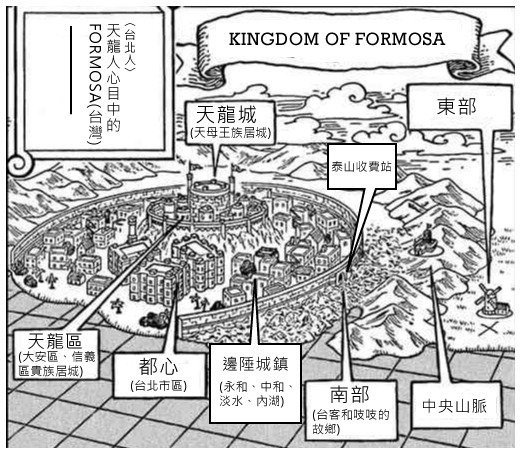 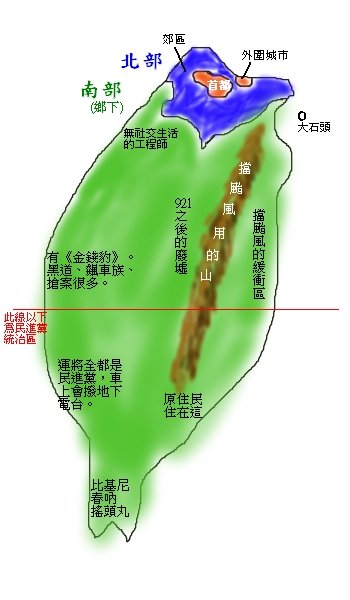 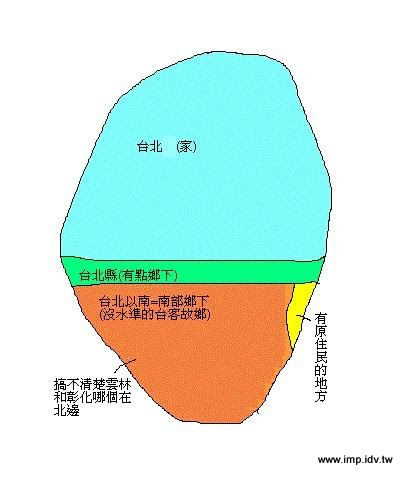