TSMC: A fab success | The Economist 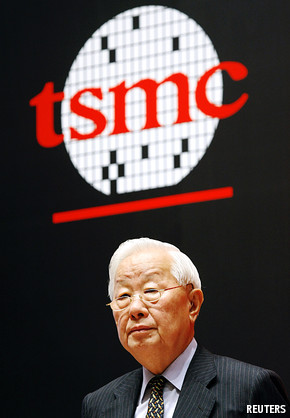 Still going strong WHEN he founded Taiwan Semiconductor Manufacturing Company (TSMC) in 1987, Morris Chang recalls, “Nobody thought we were going anywhere.” Back... ...

WHEN he founded Taiwan Semiconductor Manufacturing Company (TSMC) in 1987,
Morris Chang recalls, “Nobody thought we were going anywhere.” Back then
the rule was that semiconductor companies both designed and made chips. TSMC
was the first pure “foundry”, making chips for designers with no factories,
or “fabs”, of their own. The doubts of others suited TSMC nicely. Mr Chang,
at 82 still chairman and in his second stint as chief executive, says that
meant it suffered no competition in its first eight years.

These days the idea is more popular. Last year foundries made about half of
all logic chips (the ones that carry out computations, as opposed to memory
chips, a more commoditised market). United Microelectronics Corporation, a
slightly older Taiwanese company, turned itself into a pure-play foundry in
1995. GlobalFoundries, with factories in America, Germany and Singapore, was
set up in 2009.

Yet the pioneer still dominates. This year, predicts Samuel Wang of Gartner,
a research firm, TSMC’s revenues will exceed those of all other foundries
combined. He reckons it has 90% of the world market for advanced 28-nanometre
chips, which are essential to smartphones and tablets. TSMC’s sales in the
second quarter, reported on July 18th, were NT$156 billion ($5.2 billion),
21% more than a year before. Its net income rose by 24%, to NT$52 billion.
That said, growth should slow in the second half of the year, Mr Chang told
analysts, because smartphone-makers have been building up their inventories
of chips ahead of new-product launches and because sales of PCs and some
smartphones have been weaker than expected. Sales could even shrink in the
fourth quarter.

TSMC has thrived on a mixture of serendipity and anticipation. “The market
moved in the direction in which we were heading,” says Mr Chang. The boom in
mobile computing has meant a bonanza for several long-standing customers,
which range from Qualcomm, an American firm that dominates the market for
smartphones’ application processors, to MediaTek, a Taiwanese neighbour that
has burst onto the scene more recently. Sales to Chinese designers such as
Allwinner, Rockchip and Spreadtrum, whose chips power inexpensive Android
tablets and phones, have doubled in the past year; these all license
low-energy chip technology from ARM, a British firm that has been a partner
of TSMC’s since 2004.

The “grand alliance” of TSMC and the chip designers, as Mr Chang has called
it, has done far better from the shift to mobile devices than Intel, the world
’s biggest chipmaker. Intel both designs and makes chips (in industry argot,
it is an integrated device manufacturer, or IDM). Its processor chips are the
brains of most personal computers, but demand for these has been falling.
Although Intel’s newest processors are much less thirsty and the firm is
determined to break into the mobile market, it has so far struggled. Its
second-quarter revenues fell by 5% and its net income by 29%.

A combination of fabless designers and a pure foundry works well, Mr Chang
explains, because the designers “don’t have to worry about the
capital-intensive part of the business any more”: the foundry provides the
scale. At the same time, fabless companies, of which he reckons there are
about 50 with annual revenues of at least $100m, compete with one another and
with IDMs. “This diverse group has in total produced more innovation than
any single IDM…Just look at the mobile products,” he says.

The battle lines between the alliance and its rivals continue to shift. Intel
has entered the foundry business—and recently snaffled a contract with
Altera, an American designer that has been a customer of TSMC’s for 20
years. “I really regret that very much,” Mr Chang says. “I had an
investigation into why that happened.”

On another front, TSMC is fighting Samsung. The South Korean company makes
processors not only for itself but also for Apple, even though the two are
deadly rivals in smartphones and tablets. In addition it is the world’s
biggest maker of memory chips. Recently the Wall Street Journal reported that
TSMC, after years of effort, had won a contract to make chips for iPhones and
iPads—a victory that will have stung Samsung. (The Taiwanese company has not
commented.) Mr Chang says that he takes neither Intel nor Samsung lightly,
but insists: “We have one big advantage: we are a pure foundry. We do not
compete with our customers.” No matter how hard Intel and Samsung try, he
says, they will not enjoy the same trust.