Researcher Hans Roy opens a core sample taken from the bottom of the Pacific Ocean. A core sample like this one contained bacteria that settled on the seafloor 86 million years ago.

Back when the dinosaurs ruled the Earth, some hardy bacteria took up residence at the bottom of the Pacific Ocean. Eighty six million years later, they're still there. And a new study says they're living out the most Spartan lifestyle known on this planet.


They live in a place called the Pacific Gyre, where almost nothing reaches the seafloor. Nutrients from the world's rivers don't get out that far. Most plankton that die in the water dissolve long before any pieces of them can reach the seafloor far below. It's a rare day indeed when even a single particle lands in any given spot on the bottom.

"If you imagine that a grain of sediment falls on the surface, it will take a thousand years before the next grain will sit on top of it," says Hans Roy at Aarhus University in Denmark.

As a result, it has taken millions of years for a thin layer of sediment to form.


Roy was part of an expedition in 2009 to sample that ancient sediment. And amazingly enough, he found living bacteria buried in that clay. That's amazing because there are almost no nutrients down there for them to feed on.

Roy and colleagues report their find in the latest Science magazine. They say these bacteria may have the world's slowest metabolism, with barely enough oxygen and nutrients to keep them alive.

"I weigh 140 pounds, and I eat a few pounds of food every day, so it will take me a month or two to eat my own weight," Roy says. "These organisms will take a thousand years to eat their own weight."


Roy can't say exactly how old the individual bacteria he studies are. They may have been reproducing extremely slowly since the time of the dinosaurs. Or the individuals could be millions of years old, rebuilding themselves just fast enough to repair the inevitable damage of aging.

In any case, these microscopic life-forms have life cycles that defy human intuition.


"That's so much slower than our own, that in our eyes it looks like suspended animation," Roy says. "This is pretty much like if you would stand up and look at a tree to see if it grows at all, you won't see anything because you're looking at the wrong time scale."

I weigh 140 pounds, and I eat a few pounds of food every day, so it will take me a month or two to eat my own weight. These organisms will take a thousand years to eat their own weight.
- Hans Roy, aquatic ecologist, Aarhus University
Happily, nature has run that experiment on the seafloor.


One reason scientists are interested in this extreme lifestyle is because it provides clues about the absolute minimum conditions required to sustain life. Andreas Teske, a marine microbiologist at the University of North Carolina, Chapel Hill, says that's useful for people looking beyond our planet for signs of life.


"We would like to know how far down can we go with respect to energy supply for life," says Teske. "So we have to look at the most difficult places for life on Earth. And the deep subsurface is certainly one of these most difficult, and at the same time — just by volume, by space, by extent — one of the most dominant places on Earth."

So these bacteria are likely quite abundant, and they're very likely to be here long after we're gone.


"These organisms have no clue that we're even around," Roy says. "They could be sitting down there for 100 million years, and the whole surface could be one scorched desert, and they still wouldn't know it."

On the other hand, we, presumably, have more fun. 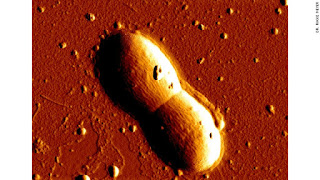 Living bacteria have been discovered deep beneath the ocean where they've had no new food or oxygen since dinosaurs roamed the earth.

Buried inside 86 million-year-old red clay, they are surviving on tiny amounts of oxygen - so little that they barely qualify as life. Indeed, the discovery could have implications for the search for life on alien planets, as it implies life may need much fewer resources than thought.


A team from Aarhus University in Denmark, Germany's Potsdam University and the University of Rhode Island collected mud samples from sediment columns deep below the ocean floor, on a cruise along the equator and into the North Pacific Gyre.


Sediment columns build up layer by layer on the seafloor and can be kilometers thick, with the youngest material on top and the oldest on the bottom. Using needle-shaped oxygen-sensors, the team discovered that the bacteria living in these sediments are alive and actively using up oxygen - albeit very, very slowly.

This may reflect cell division, but could also simply indicate a one thousand year cell repair cycle, says the team.


At the bare minimum, microbes need energy to maintain an electric potential across their membrane and to keep their enzymes and DNA working. The scientists suspect these microbial communities may be living at the minimum energy requirement needed to subsist.

"But, it’s clear that this microbial community - which has not received food from the outside world since the dinosaurs walked the earth - is still alive and active," says the team.

"The study suggests that all the knowledge scientists have accumulated about fast-growing laboratory microorganisms probably doesn’t apply to slow life beneath the ocean." Via TG Daily